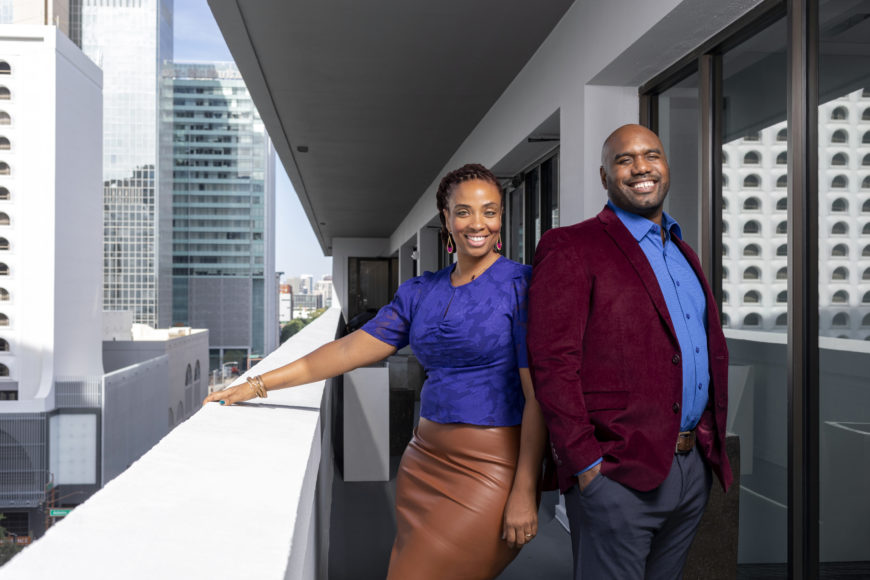 Several years ago, with Phoenix coming into its own as a major urban force among U.S. cities, husband and wife Oye and Crys Waddell recognized that a particular segment of the community was underserved, underutilized and struggling.

“We knew there were a lot of disadvantaged men and women in our community who have the experience and the know-how—the hope and the ‘hustle’—to really bring something worthwhile to our city,” says Oye. “What they lacked, though, was the proper training and access to the relationships and capital, they need to really get their ideas off the ground.”

So, in 2013, the Waddells opened the doors of HustlePHX, a faith-inspired nonprofit focused on counseling and promoting Phoenix entrepreneurs who may be outside the mainstream lines of support that many others rely on in launching their businesses.

“Without the proper guidance and stewardship, a lot of really [talented] people—and what they have to offer—are getting overlooked,” Oye says. “So we said to ourselves, ‘Hey, look, there are tremendous assets in this community and we want to help uncover those assets, help fuel people’s passions and dreams and help them start businesses and grow.”

Oye was born to head up an organization like HustlePHX. Raised in inner-city Los Angeles, he attended the University of Washington on a full athletic scholarship to play football. He went on to earn two master’s degrees, one in public administration from the University of Southern California, and the other in education, from Arizona State University. Crys, for her part, serves as the COO and chief strategist for HustlePHX. In Los Angeles, she ran an events company where she honed her natural talent for finding creative solutions for some very tough problems.

“I’m the one who comes up with a lot of cool, out-of-the-box events, ideas, and campaigns for HustlePHX,” she explains, adding that with a family of four kids, aged 6 to 13, they have somehow found the time to work side-by-side and grow their organization.

“A lot of organizations—incubators, if you will—provide educational services to their clients, and that’s where we started, as well,” Oye explains. “But once we got things underway, we realized these underserved entrepreneurs also need people—people working and walking alongside them to give them that direct mentorship they need. So that’s what we now do; we call it ‘social capital.”

“We also realized that we needed to get money into these entrepreneurs’ hands to give them that essential financial support and that ‘financial capital’ is the third prong of our approach to helping them.”

HustlePHX has grown substantially since opening its doors. From its shoestring beginnings, the organization now boasts six fulltime staff and a sizeable, carefully groomed network of more than 250 volunteers. “We can pull whatever strengths we need from volunteers with sales, marketing, operations, risk management, and financial accounting backgrounds,” Oye says. “That’s a big part of our labor force.”

Funded through charitable donations, support from foundations, a small fee-based income for some of their services, and tax credits, HustlePHX also receives financial support from local churches and banks. The Waddells have also relied on several city-based partnerships to help grow their worthwhile nonprofit. One of them is their long-term relationship with National Bank of Arizona.

“We’ve been getting help for years from the bank,” Oye says. “And especially from Kim Neiman at the Central Avenue branch. She’s been outstanding in her support of us.”

With HustlePHX now up and running smoothly, Oye and Crys have their eyes on some ambitious plans to grow their enterprise. Their long-term goal is to have a Hustle branch in every major city in the U.S.

“The PHX at the end our name is the local airport code for Sky Harbor, so we’re basing our plans on having a Hustle that serves the communities of every major airport in the country,” Oye says. “So, in the future, for example, we plan to have a HustleLAX for Los Angeles, a HustleDFW for Dallas-Ft. Worth, and so on. We think there’s a place for a Hustle in every one of these cities, and we’re committed to making it happen.”